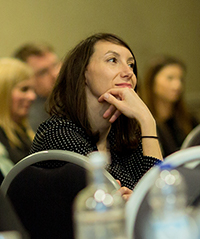 Head of Inclusion and Peer Engagement

Emma is Head of Inclusion and Peer Engagement at Scottish Drugs Forum. This involves overseeing SDF’s employability activity including the Addiction Worker Trainee Project and SDF’s peer research and user involvement work. Emma previously was SDF’s National Training and Development Officer (Harm Reduction and Emergency Responses) and involved developed and facilitated training in a range of areas including bacterial infection and drug use as well as injecting equipment provision. She also chaired the Scottish Needle Exchange Workers Forum from 2014-2018.

Emma has recently completed a Masters in Public Health which involved a research project on loneliness and social isolation in men with problem drug use in Glasgow. Since joining SDF, Emma has been involved in local and national responses to outbreaks of bacterial and viral infections amongst people who use drugs. This has involved attending Incident Management Teams, developing respources for frontline staff and people who use drugs and offering face to face briefings.

Emma previously worked with Turning Point Scotland as a development manager, developing Homeless and Housing First services in the west of Scotland, supporting individuals in active addiction and at various points in their recovery journey.  She was part of the team that developed the Housing First service initially in Glasgow and then in other areas in the west of Scotland. She has worked in a number of services in various capacities including at HMP Barlinnie as an Enhanced Addiction Caseworker.