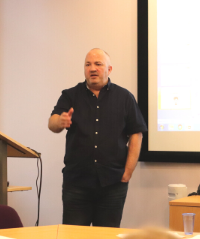 Billy Hamilton was appointed as Community Development and Involvement Officer with Hepatitis Scotland in August 2018. He has previously worked in a wide range of services since 1997.

His role involves increasing patient involvement of those affected by hepatitis and enabling their views to be heard in regard to testing, treatment and support. Billy chairs the Hepatitis Workers Forum and promotes the Voices Forums. Billy also coordinates Hepatitis Scotland volunteers who are involved in community events and peer research activity. Billy’s qualifications include BA(Hons) Politics and Economics (1997) and postgraduate certificates in Alcohol and drug studies (2003) and leadership in alcohol and drug services (2011).