The Hepatitis See campaign, led by Hepatitis Scotland for World Hepatitis Day, has been recognised in an article published in The Lancet medical journal.

The campaign aimed to raise awareness of, and challenge the stigma associated with, hepatitis C through art workshops that were attended by people who have, or used to have, hepatitis C, culminating in a public exhibition of the artwork produced at the Gallery of Modern Art in Glasgow on World Hepatitis Day (28th July 2017).

The article, written by Marc Niebel in the ‘Gastroenterology and Hepatology’ section, is replicated below, however can also be seen on The Lancet website here.

At least 71 million people around the world are estimated to be infected with hepatitis C virus (HCV), of whom 36 000 live in Scotland. The Hepatitis See exhibition held for World Hepatitis Day 2017 at the Gallery of Modern Art in Glasgow, UK, highlighted the central role of identity and stigma issues affecting individuals with HCV.

Organised by Hepatitis Scotland, these pieces of art were created at free community workshops held throughout Scotland, where affected individuals were encouraged to express their feelings under the guidance of experienced artists. Stigma is a common and under-estimated bedfellow of those affected by infectious diseases, from historical accounts of people with leprosy to those recently affected by HIV and Ebola; hepatitis C is no exception. 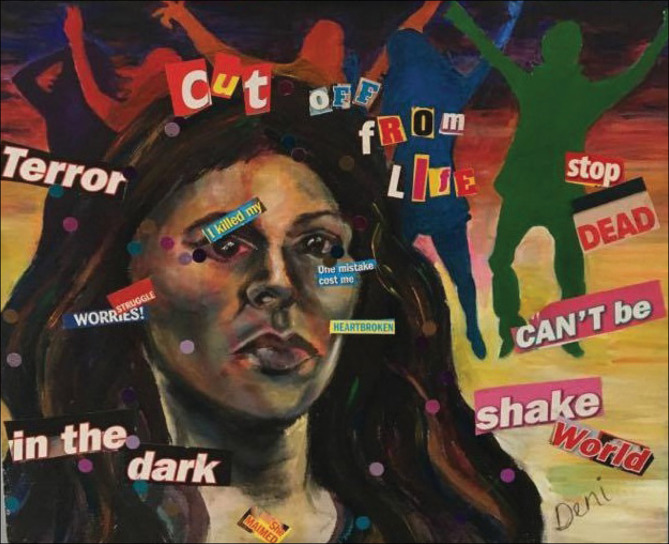 The first painting that caught my attention was Deni’s painting, Cut Off From Life, which on the one hand shows the despair and struggle of an individual with HCV using sombre colours and words such as terror or worries, and on the other, vibrant shades of red, orange, and yellow associated with the positive implication of treatment and clearance of the virus. 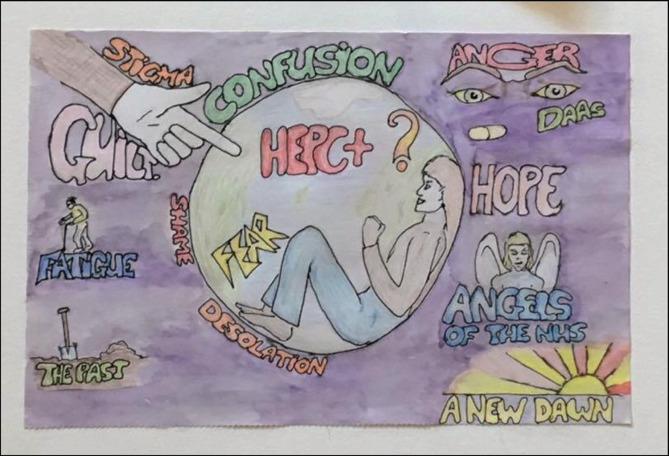 Throughout the exhibition, the contrasting themes of despair and hope were personified—for example, through the captivating drawing by Jim Clark, The Rollercoaster, which used both words such as stigma, guilt, and fatigue, and images such as a rising sun and angels to show the turbulent journey he took while affected by HCV.

Another aspect highlighted was the contaminated blood products scandal from the 1970s and 1980s, whereby some 7500 individuals became infected with HCV through blood transfusions. The drawing, My Embarrassing Tattoo, by Samuel H Smith depicted the symbol for toxicity engraved with HCV on an individual’s arm. With this the artist was comparing the humiliation of being tainted with contaminated blood with that of having a bad tattoo—hopefully something that no-one will find out about.

A key message from the exhibition was illustrated beautifully by the artist Kevin Hendrie in All Will Be Vine, which showed both a bare vine and one covered in leaves, signifying the advancement of treatment from one that previously took 12 months and had severe side-effects to one that takes 3 months, with a significant chance of treating the infection.

Through this exhibition, HCV-affected individuals were given a platform to express their feelings in visual form. Direct interactions between the artists and the public in this prominent art venue led to many stimulating discussions and new insights into the challenges faced by those affected, particularly the pervasive effect of stigma but also the positive impact of a new dawn of curative treatment.